Kill the bad guy, rescue the girl, save humanity…just another day in the Rift.

For those who travel beyond the Boundary, death awaits. For Travis Spencer, avoiding death inside the Rift is an everyday occurrence. As a Rifter, Travis works what salvage he can find out on the Boundary along with the occasional smuggling run, doing whatever it takes to keep fuel in his ship. His only company is a beautiful shape-shifter named Shay, whose goal in life is to ensure Travis remains single and frustrated. Travis and Shay’s world is turned upside-down when they rescue the mysterious Nia from marauding Vrtra attackers, dragon-like aliens who don’t take kindly to trespassers through their Boundary home. Turns out, Nia isn’t from the Rift and the secrets she holds are explosive. For Travis, it’s another day saving his fellow humans from certain annihilation!

“When in the Rift, do as the Rifters.”  The Rift is surrounded by the impassable dust clouds of the Boundary. Cut off from Earth by the vicious Vrtra and the shifting paths through the Labyrinth, the colonists of the Rift rely on the military might of the Colonial Guard to protect them. All is well until Nia’s ship shows up after 124 years of no word from Earth. Someone desperately wants to keep her arrival a secret!

“I’ve found it’s best to travel in a pack.” Caught up in a conspiracy to hide the contact between Earth and the Colonies, Travis, Shay, and Nia find themselves on the run from relentless Saivi bounty hunters and human traitors. Travis must turn to his misfit friends to stay alive, clear their names, and save the Colonies.

“The Rift, love it because you sure as shatl can’t leave it!” Travis discovers his mentor, Nicoli, has developed a starship engine called a Fold Drive. Nicoli’s achievement allows a vessel to bypass the Boundary’s shield-shattering dust and hostile aliens. Travis tracks the prototype to Teteris; the site of our hero’s final showdown. Travis discovers the Drive has the unfortunate side effect of destroying nearby stars and planets. As Travis fights for his life, he also must keep the Drive from being activated to save millions of colonists!

“I may live for today, but I exist for revenge!” Shay’s changeling abilities prove essential during their struggle. Shay overcomes her distrust of Nia and dedicates herself to saving the Colonies. Shay takes the form of her hated enemy, the Saivi, to provide the distraction Nia needs to uncover the link between the Saivi Prefect Ghatriff and the Guard traitors and exact retribution.

“That’s the best part, Shay; we get to kill the bad guy and rescue the girl.” Travis finds himself falling for Nia. When she is captured by disloyal members of the Guard, Travis and Shay enact a plan to expose the conspiracy, stop the Colony take-over, and rid themselves of the Saivi. In the end, Travis saves Nia, defeats those bent on destroying his crew while Shay accepts her new crewmate from Earth. The life of a Rifter is never easy, but it has its days! 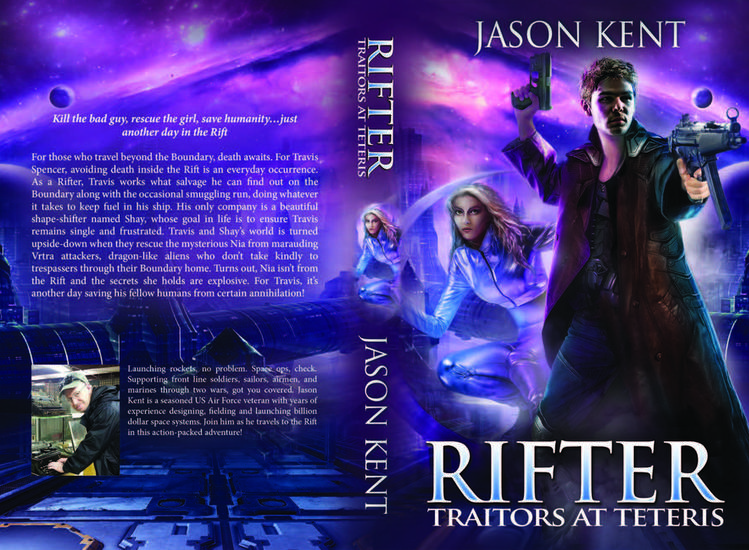